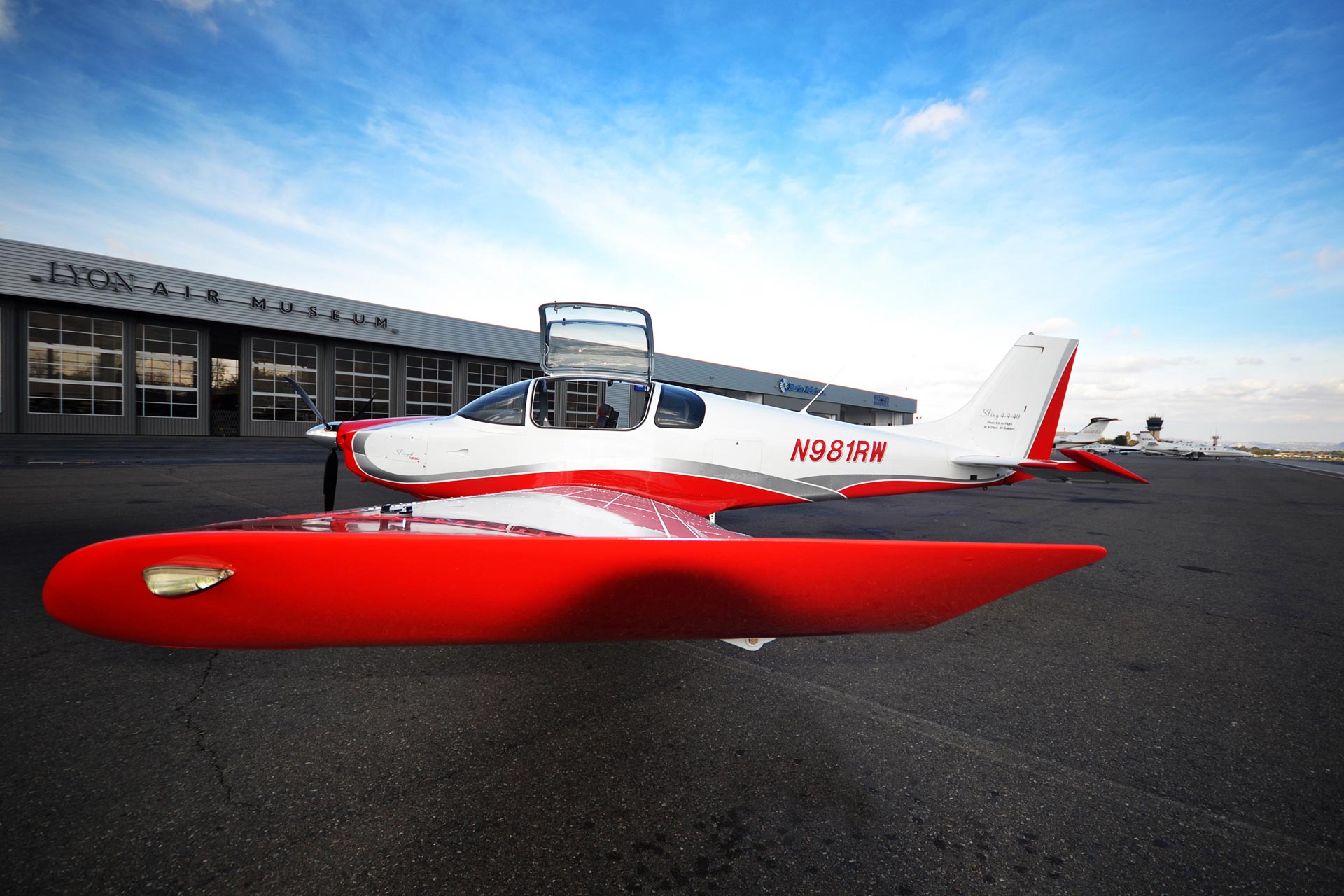 The idea of a Sling 4-seater emerged from Sling Aircraft founders’ Mike Blyth and James Pitman’s 2009 Around-The-World (ATW) Sling flight. Although designed as a 600 kg Light Sport Aircraft, it was soon clear that even with a normally aspirated 100 hp motor, it performed well up to 970 kg. Thus the Sling 2, after passing the required standards, was certified as a 700 kg MAUW.

Work also began on the development of a 4-seat version. The chief differences between the Sling 2 and the Sling 4 are wing size, engine and the centre fuselage arrangements. Where the standard Sling customarily uses a 100 hp Rotax 912 ULS or iS engine, the Sling 4 is fitted with the 115 hp turbocharged Rotax 914 UL engine, while the Sling TSi is powered by a 142 hp Rotax 915 iS Turbo Injected Sports.

The turbocharged engine gives full power at up to 15,000 feet, at which altitude the 100 hp would only be delivering approximately 55 hp. So, on a hot day the difference in power between the 912 ULS and 914 UL engine is in the vicinity of 36%, not just 15%.

The Sling 4 was built to be the most practical and desirable lightweight, four-place experimental aircraft on the market, a niche not previously filled. It’s slightly longer than the Sling LSA, but with a more powerful engine (Rotax 914 UL) and gullwing doors instead of a sliding canopy. It flies much like the Sling LSA, perfectly-coordinated with highly responsive – but not overly-sensitive – controls.

“A four-place cruiser that carries four adults, several hours’ worth of fuel and a respectable luggage load, and consumes less than 6 gph, the Sling 4 does so in leather-wrapped comfort. It has a wider cabin than a Bonanza, looks sexy on the ramp, and its turbocharged Rotax whisks it along at a decent 125 knots — all for a fraction of the price of a comparable new Part 23 airplane.”
Marc C. Lee (Plane and Pilot Magazine)

Design the exterior of your Sling Aircraft to your liking

You can turn your Sling into your personalised dream aircraft using our numerous standard or complex paint scheme and vinyl design options. In addition, Sling Aircraft uses LEDs for all exterior lighting. Not only do these use less energy and generate less heat, they are exceptionally bright and allow for sharply defined beams.  Effortlessly elegant, superbly appointed and finished with a forensic eye. 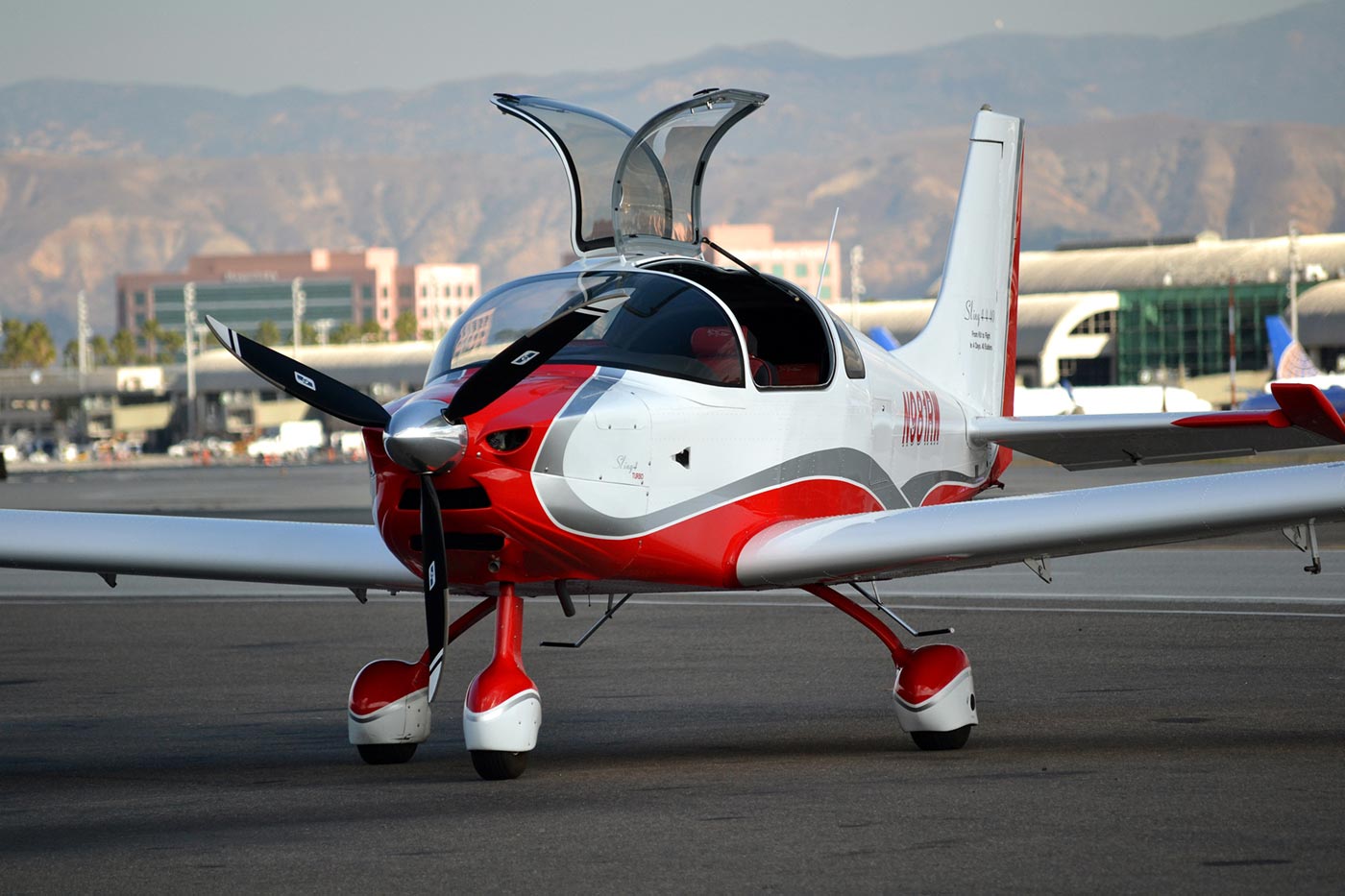 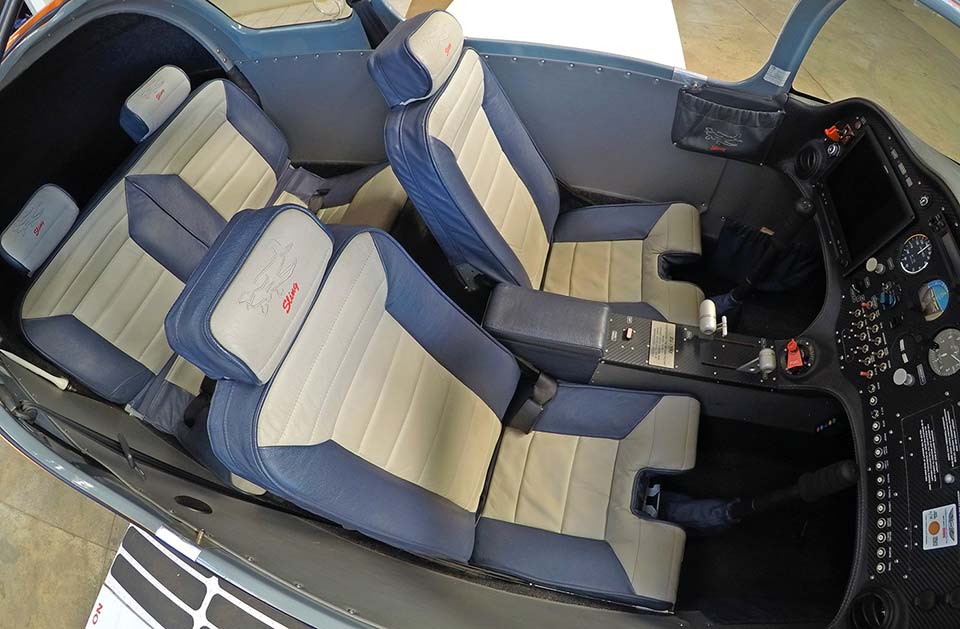 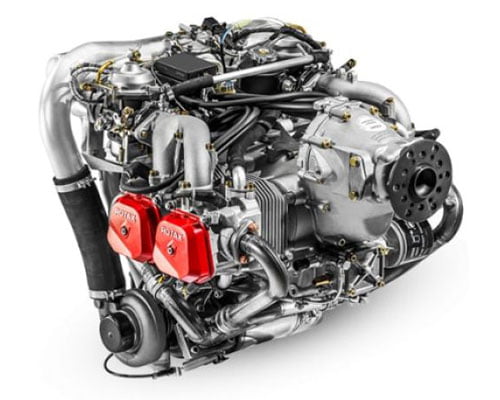 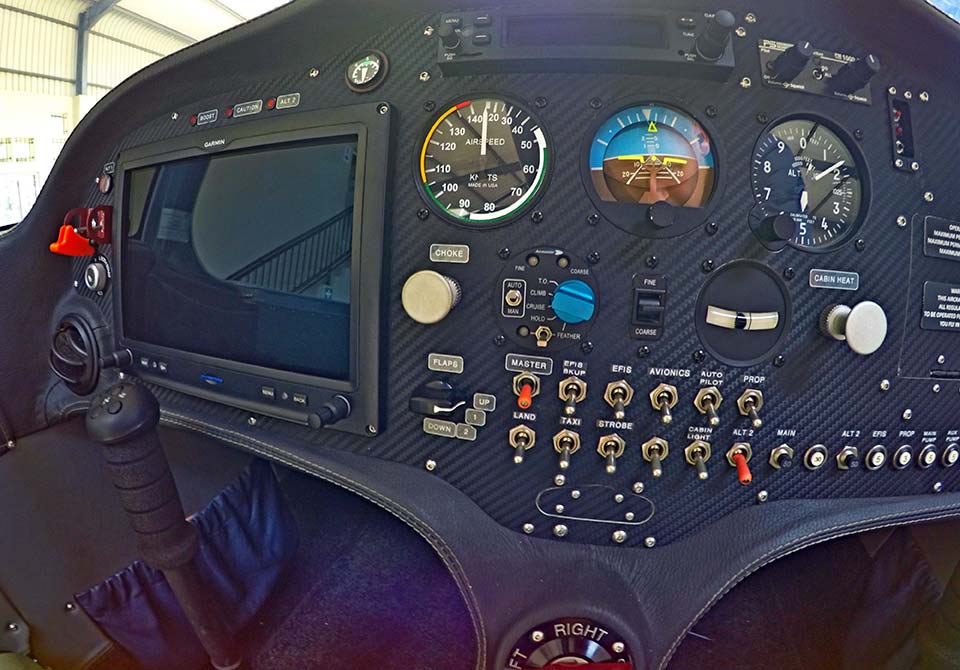 Excellent instrumentation options make for a unique and state-of-the-art flying experience, at a fraction of the cost of our certified competitors.

Full integrated EFIS with autopilot, radio and transponder with 2020-compliant ADS-B is available with live weather and traffic alerts in the cockpit.

We have standardised on Garmin instruments throughout. They are modern, reliable and you can get the backup you need no matter where you are in the world. 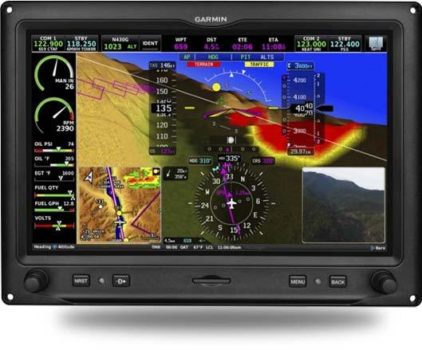 Designed from the ground up with a native touchscreen interface, the Garmin 10” G3X Touch flight display is the smartest, most advanced large-format flight displays Garmin has ever designed specifically for LSA and amateur-built aircraft.  The integration and versatility provided by the G3X Touch make it the ideal panel layout for your Sling Aircraft. 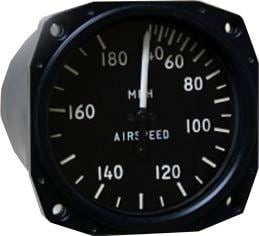 Backup instruments as standard are 3 1/8” analogue instruments for airspeed and altitude. Falcon equivalent airspeed indicators have been one of the most chosen flight instruments by kit plane builders and sport pilots. There are many great advantages: excellent slow speed characteristics; very progressive increments; variety of ranges; light weight; short length; affordable price; and reliability. All airspeed indicators are housed in an aluminum case and all parts are made with metal. Also on that the image is of a 2 pointer altimeter and we actually use 3 pointer. Click on the learn more link and see the page it pulls up. 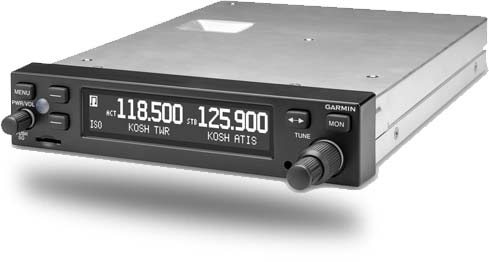 Designed specifically for light sport aircraft, the GTR 200 combines powerful Comm capabilities with advanced workload-reducing features formerly only found in high-end certified systems. Its slim 1.35” tall design allows you to make the most of limited space in your panel while 10 W of transmit power helps ensure solid communications between you and ATC or other aircraft in your vicinity. Information displays on the large, sunlight-readable display with brightness levels that can adjust automatically to the natural light level in the cockpit, or can be adjusted manually by the pilot. 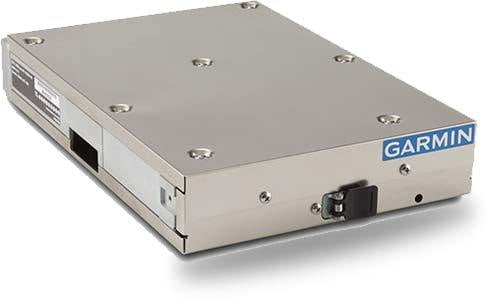 For nearly 20 years, Garmin has led the development and deployment of various ADS-B projects, and they have optimized their ADS-B solutions for light sport aircraft. The GTX 35R ADS-B transponder integrates with Garmin G3X and G3XTM Touch to provide you quick, cost-effective and powerful ADS-B “Out” capabilities you can control through your flight display.

The Garmin GMC 507 control panel offers a dedicated interface for the GFC 500 autopilot in certified aircraft as well as G3X autopilots in experimental and light sport aircraft. GMC 507 allows pilots to control the advanced features offered by Garmin digital autopilot systems, including advanced autopilot modes such as indicated airspeed hold, independent flight director and third-axis yaw damper (when installed with appropriate servos). Plus, the control wheel integrated into the GMC 507 makes for easier pitch, vertical speed and airspeed adjustments, while separate knobs allow twist-control of heading/track and altitude. 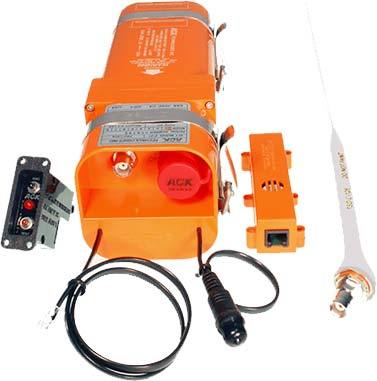 For distress alerts, your Sling Aircraft is fitted with the standard frequency of the 406-MHz E-04 ACK ELT. This internationally-regulated mobile radiocommunication service aids in search and rescue operations to detect and locate aircraft. This model, which includes 250 knot whip antenna does not come standard, however it is available as an optional extra.

The Sling 4 include a host of handy standard features. Interior is all leather upholstered, the carpets are sound proofed and there are cabin heaters on both sides. Seats are adjustable, both base and back, as are the pedals.

Controls are full-dual – stick, pedals, throttle and brakes. Comfort on the inside is complemented by robust, safety-first design on the outside. Slings are made using CNC punched aircraft grade aluminium, main spars are anodised and all aluminium parts alodined against corrosion. Front gear, engine mount and pedals are 4130 steel, while ailerons and elevators have pushrod controls with bearings; indeed all control surface hinges use ball bearings.

Sling Aircraft are inexpensive to buy and run. The graph below will give an approximate breakdown of how the costs per hour are realized.

A great warranty means great peace of mind in the sky.

Sling Aircraft Warranty options will prolong your Sling’s life and future adventures giving you peace of mind high in the sky. Contact us regarding warranty options that will protect your Sling. This will keep your Sling flying like new; the only thing we can’t keep new is that new aircraft smell.

PHOTOS OF OUR SLING 4 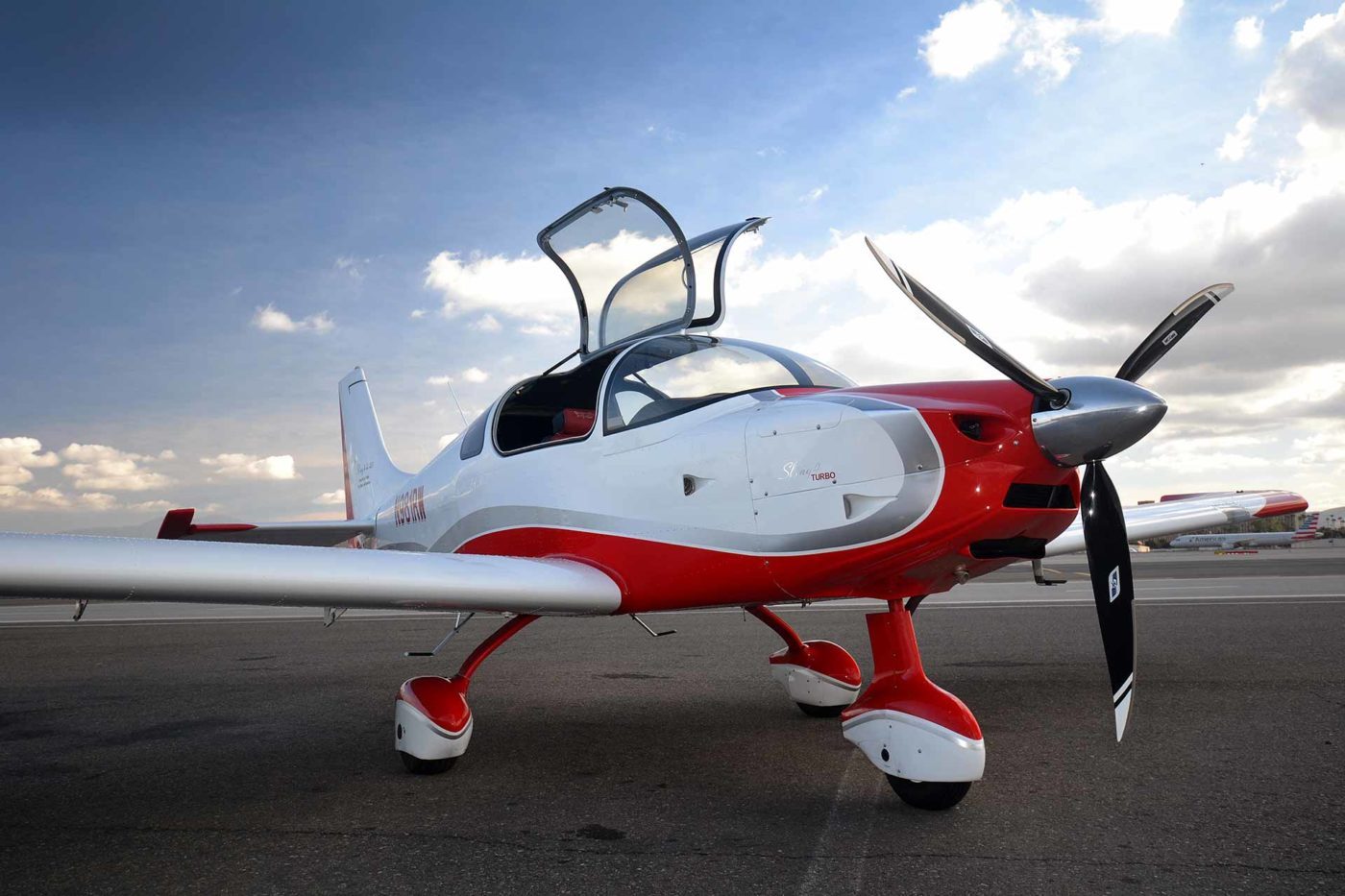 Our Sling 4 will comfortably cruise at 130 KTAS.